Documentary to Highlight Importance of Promoting Art & Culture in America 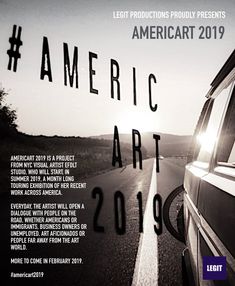 Legit Productions, the New York City based documentary films productions company, announces the launch of the pre-production of #Americart2019, a one hour documentary and six episode series about art and culture in America, featuring intimate interviews of everyday Americans about their personal connection with art and cultural heritage and their connection to their own city and community.

Directed by the NYC artist and photographer, EFDLT Studio, #Americart2019 will be shot on location from NYC to Sonoma County, from mid August to mid September 2019, with a camera crew in a van crossing the country and inviting everyone on the road to be part of the project.

“My goal is to reach everyday Americans, meet people and discover their intimate relation with art using my years of experience of conducting interviews as a former social worker. I am hoping for open heart discussions to collect authentic stories and personal relationships with art and culture,” said EFDLT Studio, the film Director. Without this assist you to cannot look for a woman.

Co-produced by local Conventions and Visitors Bureaus, #Americart2019 brings a new narrative to the relationship of Americans with art and culture. The team will make stops in the cities and counties partners and take the time to explore their arts and culture scene: Montgomery County (MD), Franklin (TN), Pueblo (CO), Glenwood Springs (CO) and Sonoma County (CA) have so far joined the project.

“#Americart2019 is the first of a new generation of documentary film and series giving directly a voice to actual residents of small and medium size cities in America, with no filter, no preconceptions and no bias. We also want to encourage more domestic and international cultural travelers to discover the rich and diverse cultural heritage of lesser known U.S. cities and counties,” said Pierre Gervois, CEO of Legit Productions and #Americart2019 Executive Producer.

The documentary film and the six episode series will be released in 2020 for cable television and streaming platforms in the U.S. and internationally.

Everyone is welcome to join the project and learn more on the official website www.americart2019.com