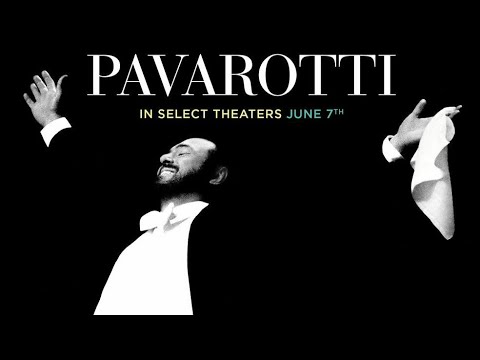 The official trailer for the Ron Howard Pavarotti documentary trailer is out and available to view on YouTube and the film will be released today, June 7th.

WATCH THE VIDEO ABOVE from USAAudiences’ The Turnout to see Eloy’s reaction to the Pavarotti trailer.

For more info about your host Eloy and The Turnout channel, CLICK HERE or go directly to the channel at https://www.youtube.com/theturnout

From the filmmaking team behind the highly-acclaimed documentary The Beatles: Eight Days A Week – The Touring Years, PAVAROTTI is a riveting film that lifts the curtain on the icon who brought opera to the people. Academy Award winner Ron Howard puts audiences front row center for an exploration of The Voice…The Man…The Legend. Luciano Pavarotti gave his life to the music and a voice to the world.  This cinematic event features history-making performances and intimate interviews, including never-before-seen footage and cutting-edge Dolby Atmos technology.

Academy Award-winning filmmaker Ron Howard is one of this generation’s most popular directors. From the critically acclaimed dramas A Beautiful Mind (2001) and Apollo 13(1995) to the hit comedies Parenthood (1989) and Splash (1984), he has created some of Hollywood’s most memorable films.

Howard made his directorial debut in 1978 with the comedy Grand Theft Auto (1977). He began his career in film as an actor. He first appeared in The Journey (1959) and The Music Man (1962), then as Opie on the long-running television series The Andy Griffith Show (1960). Howard later starred in the popular series Happy Days (1974) and drew favorable reviews for his performances in American Graffiti (1973) and The Shootist(1976).

Howard’s portfolio includes some of the most popular films of the past 20 years. In 1991, Howard created the acclaimed drama “Backdraft”, starring Robert De Niro, Kurt Russelland William Baldwin. He followed it with the historical epic Far and Away (1992), starring Tom Cruise and Nicole Kidman. Howard directed Mel Gibson, Rene Russo, Gary Sinise and Delroy Lindo in the 1996 suspense thriller Ransom (1996). Howard worked with Tom Hanks, Kevin Bacon, Ed Harris, Bill Paxton, Gary Sinise and Kathleen Quinlan on “Apollo 13”, which was re-released recently in the IMAX format.

Howard’s skill as a director has long been recognized. In 1995, he received his first Best Director of the Year award from the DGA for “Apollo 13”. The true-life drama also garnered nine Academy Award nominations, winning Oscars for Best Film Editing and Best Sound. It also received Best Ensemble Cast and Best Supporting Actor awards from the Screen Actor’s Guild. Many of Howard’s past films have received nods from the Academy, including the popular hits Backdraft (1991), “Parenthood” and Cocoon (1985), the last of which took home two Oscars.

Howard directed and produced Cinderella Man (2005) starring Oscar winner Russell Crowe, with whom he previously collaborated on “A Beautiful Mind”, for which Howard earned an Oscar for Best Director and which also won awards for Best Picture, Best Screenplay and Best Supporting Actress. The film garnered four Golden Globes as well, including the award for Best Motion Picture Drama. Additionally, Howard won Best Director of the Year from the Directors Guild of America. Howard and producer Brian Grazer received the first annual Awareness Award from the National Mental Health Awareness Campaign for their work on the film.

Howard was honored by the Museum of Moving Images in December 2005, and by the American Cinema Editors in February 2006. Howard and his creative partner Brian Grazer, were honored by the Producers Guild of America with the Milestone Award in January 2009, NYU’s Tisch School of Cinematic Arts with the Big Apple Award in November 2009 and by the Simon Wiesenthal Center with their Humanitarian Award in May 2010. In June 2010, Howard was honored by the Chicago Film Festival with their Gold Hugo – Career Achievement Award. In March 2013, Howard was inducted into the Television Hall of Fame. In December 2015, Howard was honored with a star in the Motion Pictures category, making him one of the very few to have been recognized with two stars on the Hollywood Walk of Fame.

Howard also produced and directed the film adaptation of Peter Morgan’s critically acclaimed play Frost/Nixon (2008). The film was nominated for five Academy Awards including Best Picture, and was also nominated for The Darryl F. Zanuck Producer of the Year Award in Theatrical Motion Pictures by the PGA.

Howard has also served as an executive producer on a number of award-winning films and television shows, such as the HBO miniseries From the Earth to the Moon (1998), Fox’s Emmy Award winner for Best Comedy, Arrested Development (2003), a series which he also narrated, Netflix’s release of new episodes of “Arrested Development”, and NBC’s “Parenthood”.

Howard’s recent films include the critically acclaimed drama Rush (2013), staring Chris Hemsworth and Daniel Brühl, written by Peter Morgan; and Made in America (2013), a music documentary he directed staring Jay Z for Showtime.

Recently, Howard directed Inferno (2016), the third installment of Dan Brown ‘s Robert Langdon franchise and The Beatles: Eight Days a Week – The Touring Years (2016), a documentary about the rock legends The Beatles. He also produced the second season of Breakthrough (2015), Mars (2016), and directed the first episode of Genius (2017), based on the life of Albert Einstein, all for NatGeo.